Isn’t it interesting to think about a world without plastic surgery, or at least one where no one would consider such a thing, because the natural face is…or was, so precious?

That was the initial concept behind this idea…years ago, thinking about the obsession to look better in all ways. I’d just finished watching a BBC series on all the things that had gone wrong and thought…what if? What if the US was a place affected by a virus that would wipe out the DNA structure for the face…and the government benevolently stepped in to help out. Then a few decades later, conspiracy theorists were put in jail for attempting to uncover the truth. Well, this coincided with visiting my husbands hometown of Ouray, just on the other side of Telluride. It’s all the is natural, sexy, rugged and remote, with the bonus of being home to one of the countries largest (and now defunct) gold mines. Ouray and the surrounding area is also famously known as “little Switzerland” because the town of @500 (goes up to 1K in the summer) literally sits in a bowl, surrounding by mountains going straight up. This territory has made it the #1 area of off-roading 4-wheel drives. What that really means is one gets is raised jeeps and tries no to puke going up and over car-sized boulders.

The concept merged with the town to form Incarnation. Really, who can make up a remote town with mine-riddled mountains; a place that has no lights or gas stations, where everyone knows (and dates) everyone, and the natural hot springs bubbling up from the ground pulls in tourists from around the world.

I based the story on a few still living towns-folks, and made up a few others. The bars, restaurants and yes, the Moose lodge, spa and mine all exist. The old miner referenced is actually a man my husband, Roger, worked with as a teenager. The two would ride the house-sized vehicles up the hill and stay in an old, wooden shack, resisting against the gail-force winds at night sucking down moonshine, and during the day, Rog would careen over deep crevases, stringing metal cables–the goal being to prevent the random skier or snowmobiler from meeting an early death.

Without giving too much more away, I will add this first book was a joy, and frankly, it was a bit painful to then transition to book 2 of the Chambers series–The Spirit Warrior. The style, flow and attitude of this book is uniquely its own. I loved it. I want to be Kyle. But then again, I want to be Billy! For a reader who hasn’t gotten in to my other books, the constant is fast-paced, no (or <5 swear words) and hot but clean. In other words, your grandma could read it and not blush, and you can leave it on the coffee table without fear that your six year old is going read something untowards. As an author, it’s a challenge to write within those parameters, but I enjoy it.

Personally, this cover ranks right up there with my fav covers…and probably because of the guy chosen and double helix, it might even 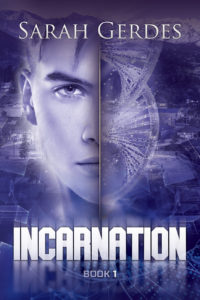 edge out my other favorite covers as the best so far. (wow. do I like this one). This image in the back is actually Ouray, and I’ve uploaded a few other fav Ouray pics to the book listing just so those of you who have never been can take the virtual tour. It is about 5.5 hours drive from Denver, or a short flight into Montrose. In the winter, it’s all about ice climbing in the ravines in the center of town, and in the summer–the four-wheeling as I mentioned. (sorry for the poor quality but they were phone pics:)

Because the cover is so gorgeous, it actually comes out a bit purple in the print version.

Here are the links for all types of devices and purchased preferences.

The book is also available at all the major on-line bookstores in ebook version. You can request a library stock order if that’s your preference. I can’t wait to finish the 2nd book.