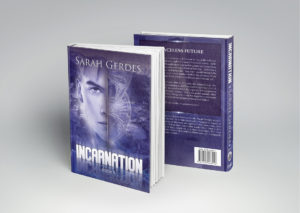 Years ago, Kyle’s parents fled Denver to live a life without governmental oversight in a small Colorado town.  Kyle has always thought there was nothing more in Ouray than hot springs for the tourists and basketball for him—his ticket for a way out and a bigger and better life.  But when an old miner tells him about a mysterious room hidden within the caverns of an abandoned gold mine, Kyle is determined to see what he can find.

What he discovers shocks him to the core: the identification for every US citizen, documenting their DNA and the face they should have been born with.  In over his head, Kyle goes to the one person who might be able to help. A loner and a computer genius, Billy quickly figures out what the government has kept from everyone for decades.  And it’s a secret that might get them both killed…

Gripping and inventive… An irresistible page-turner!

Gerdes skillfully combines medical technology and political intrigue with high tension of an action thriller in this engrossing first installment of the Incarnation series. An athletic standout, seventeen-year-old Kyle has his future sorted out in his mind with plans to get a scholarship and pursue higher education. But when he comes across a hidden cavern that contains a dangerous government secret: the identification for every US citizen, documenting their DNA and the face they should have been born with, Kyle finds himself in the middle of a dangerous conspiracy. Gerdes expertly manages her varied ensemble cast (with realistic teens and adult characters), injecting them with emotional depth and relatability. The potent mix of conspiracy, medical intrigue, convincing young romance, and intricate worldbuilding keep the narrative drive strong. With high suspense, palpable tension, and well-constructed plotline, this page-turner will make Teen/YA readers greatly excited for the next installment.