Kissing a rockstar was never on my bucket list of things to do. Still isn’t. Yet, when the opportunity presents itself, one must take it, mustn’t one?

It all started when Rog said that ‘we needed a break’ and he wanted to spoil me. I don’t recall the order of those two comments, but when one is offered a Mexican vacation, the standard response should invariably be ‘yes.’ When he asks about where I want to stay, I didn’t have an opinion (when you’ve been going to Mexico for as long as I have, you’ve pretty much seen it all–or so I thought).

A day later he tells me he has mixed it up and booked the Hard Rock Hotel in Puerto Vallarta. Yes, I’d seen the ads for the one in Las Vegas (in case you have missed the MTV-like commercials, everyone has seemingly stepped from the pages of a magazine, the music is all that is hot and sexy and the food heaven sent), and yes, they were offering a special ($1,500 worth of hotel credit). Thus, I checked out the spa, read the reviews (mixed on all aspects) and said ‘why not?’

So it was that the plane ride down was all about introspection. That ended the second we pulled up to the hotel and was assaulted with You give love a bad name by Bon Jovi. I turned to Rog. “You made sure to order up all the sexy people right?” He nods, humoring me.

At the counter, we are informed we can rent any one of 22 Fender guitars, along with headsets and amplifiers to we can practice without disturbing anyone. I don’t catch his last comments because A Whitesnake song comes at me from above, like a demon from hell, piped down in overhead speakers (and I only know its Whitesnake because Rog tells me). As we walk through the lobby (with looping videos of Pitbull and past a stream of authentic rockstar items), I’m suddenly face to face with a lifesize picture of the Guns-N-Roses band members. I realize that Slash has bigger hair than me (I feel a twinge of jealously) and Axl Rose was so skinny his entire waist was the size of one of my thighs.

It’s about four pm, and as we head into the elevator, I’m starting to snicker. No sexy people. The original flag from Woodstock (it’s of big lips btw) hangs just below the arch of the hallway is the line “Love in an elevator,” by Steven Tyler, nicely called out in subdued, foot-size silver lettering. Are you getting a visual yet?

Blessedly, the room has no music, but I can hear the blasting from the pool area. It’s Back in Black and I start to fantasize about earphones and my favorite Sesto Sento Moby remix–really loud.

You can do this, I tell myself. It’s only a week. I keep hope alive that poolside will feature people in my decade and those that evidently chose the music. But first, I want to work out. The sun is setting, the breeze is coming in. The music in the gym has got to match the vibe. Steel, modern, pool front with the ocean in the background. Rog even takes a picture (the smile is genuine. I’m in a warm place, not much clothing and am positive the gym will be rocking). 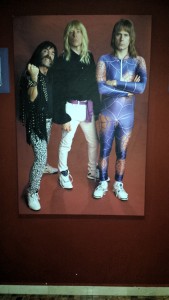 Spinal Tap is alive…every day at the gym

It is. To Tom Petty. Who. In. The. H**l works out to Tom Petty? He’s a great writer of lyrics, of course, but I certainly don’t feel like having my heart drug around.

That’s quite alright I repeat to myself, smiling falsely at Rog. I don’t want him to feel bad for booking this place nor do I want to appear an ungrateful shrew for hating the music. I walk forward with fortitude. Right into a life-size picture of Spinal Tap. For my dear readers who are as cool as I am, do you know who Spinal Tap is? I didn’t. Rog did (his Colorado roots are starting to seep through, don’t you think?). Now folks. When working out, isn’t it more appropriate to see images of beach bodies–or no images at all, rather than be forced to look at a skinny man poured into a lycra outfit that should only be worn by downhill skiiers racing at 100MPH? My thoughts exactly.

I know at this point, you really don’t believe me (I could barely believe it myself), so I started taking pictures as evidence. I made it through the workout, thanking Steve Jobs once again   (may he rest in peace) for the iPhone that saved my ears, changed for dinner and walked to the elevator.

Two things then happened at once. The first is I was struck by Bon Jovi everywhere singing Living on a Prayer. 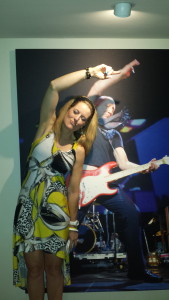 I can’t take it anymore. I lose myself to the notion of being a product of the seventies, channeling my inner flower-child-meets-bic-lighter-groupie and stand by Pete. In a single moment of rock-star-ness, I swirl my arm like every seventeen year old wanna-be guitarist and I become one with the picture. Of course it would only be fitting that in my moment of anonymous greatness than a woman walks by. She offers to take a photo and I do what I’ve never previously wanted to do. I kissed the rock star. Or at least his picture. That’s as close as I’m ever gonna get. 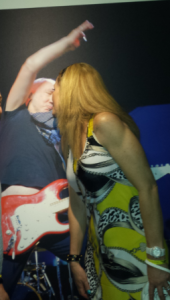 And as the final notes of Bon Jovi fades, I’m thinking about my prayer. One that includes music from the 90’s, 00’s, 10’s and maybe, just maybe if I’m really lucky, 2019. That is, if my prayers are answered.