This is a great, gross, gluten-free idea that I found on Pinterest but decided to modify. In that version, a marshmallow was cut in a triangle and put on the end of a toothpick. I thought 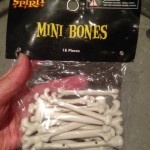 that was OK, but why not upgrade it? I went to the Halloween store (Spirit Halloween) and purchased two packages of small bones for $3.00 each. I then used my Ghiradelli chocolate used for melting and once I affixed the small marshmallows to either end of the bones, dipped them in chocolate. 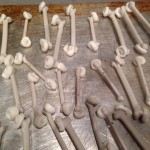 bones with the marshmallows attached. You can see I basically pushed the marshmallows on the ends, which were helpfully curled. you have to be fast about this, because they start to harden, and you want the chocolate on before they turn crusty!

See the pictures. BTW- this also doubles as a game. The bones have two holes. String some fishing line in between and suddenly you h 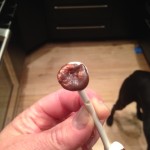 after dipping in chocolate.

ave a game that kids, or raucous adults can play–as in, eat the marshmallow off the line first without it falling to the ground. (I’d recommend you confiscating iphones before you do this however. It gets pretty silly).

Store in an airtight container for up to 3 days. Beyond that they taste stale.